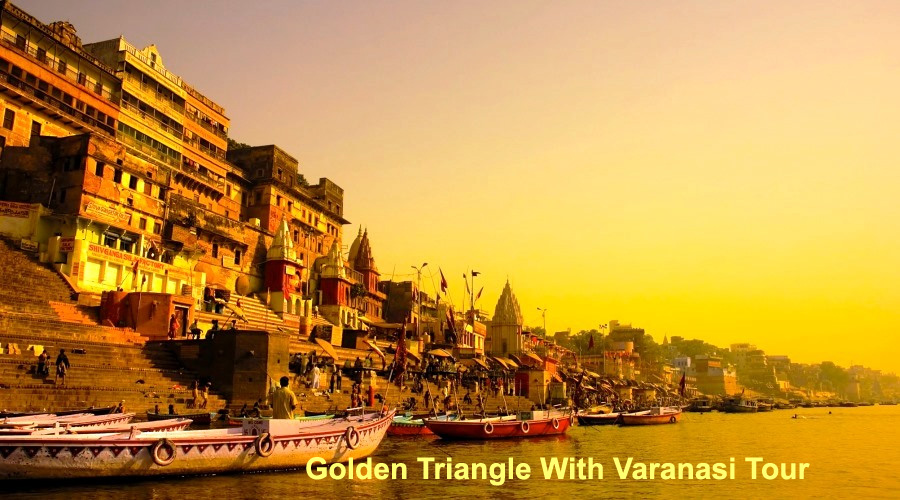 An individual who wishes to explore the prominent tourist locations in India should opt for our Golden Triangle Tour With Varanasi.

A person can view the cultural cities of northern India, i.e., Delhi, Agra, Jaipur, and Varanasi, with our package. Every city has something unique to offer you during the 7 days/6 evenings visit. To introduce every one of the cities, one might say that Delhi is a juxtaposition of the old and new. Agra is renowned for lodging the Taj Mahal, while Jaipur parades the Rajputana eminence. The evening Ganga Aarti in Varanasi presents an exceptional scene and finishes your outing to the lively country.

1. Arriving In The Capital City Of India

Upon your landing at the Delhi Airport, meet our representative, who will help you with an assisted transfer to the inn. Unwind for some time, and from that point, prepare to explore a portion of the attractions of the capital of India.

Your half-road trip will incorporate the best places to visit in Old Delhi, like Jama Masjid - probably the biggest mosque in India. Red Fort - Built up of red sandstone, the notable milestone is named as a UNESCO World Heritage Site. Chandani Chowk - a customers' heaven, the spot is a mother lode of all you can dream of. After that, you will move back to your hotel for an overnight stay.

Post breakfast, the second day is booked for the Delhi Sightseeing visit. Visit the Lakshmi Narayan Mandir, otherwise called the Birla Mandir. Offer your prayers and witness the loftiness of the sanctuary.

Commemorate the martyrs of World War I and the Gandhi Memorial. Drive past the Parliament House and different government offices. Lastly, Humayun's Tomb and the Qutub Minar are also included in your list of sightseeing before leaving for the next stop of Delhi Agra Jaipur Varanasi Tour.

When finished with the outing, we will hit the road to Jaipur. After reaching the location, we will complete the check-in formalities at the hotel. After that, we will have an overnight stay in the hotel as we will reach there by night.

Day 3 of the Golden Triangle Tour With Varanasi is planned for sightseeing in the Pink City. We will first visit the beautiful City Palace inhabited by the royal family to date. We will also visit the antique example of craftsmanship known as Hawa Mahal, which is greatly influenced by the culture of Mughals and Rajputs. We will also roam around some of the World Heritage Sites of Jaipur, i.e., Jantar Mantar and the extraordinary Nawab Sahab Ki Haveli. Jaipur's trip is incomplete without exploring Jal Mahal, which Sawai Pratap Singh made in 1799.

Finally, we will be wandering in the bustling markets, and we will purchase gifts that will help you remember your astounding family occasions in India. After that, we will have an overnight stay in a hotel.

After relishing a tasty breakfast, we will head towards Agra, our next stop in Delhi Agra Jaipur Varanasi Tour. Your road excursion to the 'City of Taj' additionally incorporates a stop on the way to the Fatehpur Sikri. Laid out by Akbar as the capital of the Mughal Empire, the city is a UNESCO World Heritage Site. After visiting various notable landmarks like Buland Darwaza, the Palace of Jodha Bai, Birbal Bhavan, Tomb Of Sheikh Salim Chisti, and Diwan-I-Khas, we will move towards our pre-booked hotel for an overnight stay.

After that, we will get up promptly early in the morning and get moved to the Taj Mahal to appreciate its heavenly excellence during the dawn. (Taj Mahal stays shut on Friday). Post this; we will prepare to visit the Agra Fort and burial chamber of Itimad-Ud-Daulah.

The Agra Fort is an old fort that has filled in as the primary home of the heads of the Mughal Dynasty until 1638. Otherwise called the Baby Taj, the Tomb of Itimad-Ud-Daulah mirrors a jewel box and presents a sight. In the evening we will get on a train for our reserved journey to Varanasi. We will enjoy the overnight journey by train.

Now we have come to the final location of our

Golden Triangle Tour With Varanasi. In Varanasi, you will receive a warm greeting from our representative, who will assist you with a comfortable transfer to the lodging. Check-in and unwind yourself. Afterwards, we will continue on a trip to Sarnath. Settled close to the conversion of River Ganga and Varuna, Sarnath is one of the four sacred Buddhist sites.

We will also cover the destinations like Alamgir Mosque or Beni Madhav Ka Darera, Dashashwamedh Ghat, and the Bharat Mata Temple. Built-in the seventeenth century by Aurangzeb, the mosque depicts an ideal Hindu and Islamic architecture mix.

The evening part of the trip is reserved for some mythological activities. We will visit the holy Ganges to see the grand Ganges Aarti (Lamp Ceremony) on the banks of the River Ganges. Ganga aarti is a fire custom performed to appreciate the river and request its blessings. It includes reciting, bells, fire, blossoms, and just the beginning. Each evening around dusk, many individuals accumulate at Dasaswamedh Ghat to observe the Ganga Aarti of Varanasi. The aarti is performed on a stage by seven youthful priests. We are certain that it will be an awesome and critical occasion for your excursion. And from there on, you will be moved back to your hotel for an overnight stay.

We will have an amazing breakfast on the final day of our Delhi Agra Jaipur Varanasi Tour. Post satisfying your hunger, you will be taken to the airport for the scheduled domestic flight. And with that, our Golden Triangle Tour with Varanasi comes to an end.